I Want to be a Gang Member

You are five years old and standing on your back porch, staring out across your backyard. What do you see? Manicured lawn? Rolling pastures? An orchard?

When I was five, and I stood on my back porch I saw: a huge wood pile used to fuel my father's big bakery ovens all year long; my sandbox nestled up to an unpainted fence; weeds intermingled with the tall green grasses in the vacant lot I called home; and, near the back lane, a burning barrel, rusted and red and brown with an outhouse nearby.


CHILDHOOD REGAINED – Stories of Hope for Asian Child Workers is a collection of 20 short stories and a poem, all written specifically for this anthology to raise awareness of the plight of millions of young children working long hours in factories, mines, quarries, on city streets, and on commercial farms in Asia.

The editor and writers have all donated their time and skills, and all net proceeds from this anthology will go to a respected charity that helps Asian child workers.
In writing my story, Seeds of Slavery, I went online to research some real-life stories of children sent to work in the cottonseed fields of South Asia. Some of the information I gleaned to support the plot of my story came from this document - but there were many!

Hybrid cottonseed production in India is a labour intensive activity. The main part of this production is cross-pollination which is done manually. This activity alone requires about 90% of the total labour and is done mostly by children. Children are employed on a long-term contract basis through advances and loans extended to their parents by local seed producers, who have agreements with the large national and multinational seed companies. Children are made to work 8 to 12 hours and are paid less than the market and official minimum wages. They are also exposed to poisonous pesticides used in high quantities in cottonseed cultivation. Most of the children working in cottonseed farms belong to poor families from Scheduled Castes (SCs) or Dalits, Scheduled Tribes (STs) or Adivasi, and Backward Castes (BCs). Farmers employ children, particularly girls, primarily in order to minimize costs. Farmers also hire children in preference to adults because farmers can squeeze out higher productivity from children per day. Children will work longer hours, will work much more intensively and they are generally much easier to control than adult workers – whether through verbal or physical abuse or through inexpensive treats like chocolate or hair ribbons.

The children in Seeds of Slavery: Daksha, Sarla and Kalami will tell you through their voices how the children in the cottonseed fields work, survive and hope for a better life. Enjoy the excerpt below and be sure to sign up for the Pre-Sale price!

Daksha awoke at dawn, splashed cold water on her face, and squinted out into the darkness. The sky was growing lighter in the east as she stepped over the threshold of the old farmhouse. The past two months had been so hard. Uncle had finally found her a cot beside Kalami and some of the other girls a few weeks ago. Kalami had reached across the tiny space between their cots that first night and squeezed her hand. Daksha squeezed back, happy to have someone she knew close by. Daksha was relieved she no longer had to sleep in the tent with some of the adults. Many of the men snored loudly and sometimes she was worried about being so alone. Uncle was not always at the farm. Those were the worst times. She hurried through the dust and took her place near the cooking fires already burning brightly. She quickly made some tea and sat by the fire with Kalami and some of the other children getting ready to move out into the cottonseed fields. I am glad Sarla doesn’t have to work in the fields like Kalami.

The sun was just peeking over the horizon when Daksha reached the field. It was a big farm. She could not see the end of it—just rows upon rows of cotton plants. Some came as high as her shoulders. Daksha squatted in the dust with her basket at her feet. She reached out to grab the first flower of the day. Carefully choosing only the male flowers, she moved down the row, bending, picking, bending, picking just like her uncle’s chickens scratching in his yard. Daksha never chatted with any of the other girls. She was too tired to even smile anymore. She knew she would have to walk around this field two or three times today. The early morning was the easiest when the hot sun was not scorching her shoulders so much. Her stomach rumbled as she bent to pick a flower low to the ground, hiding under some of the sharp dry branches. A stem pricked her finger. The blood dripped from her hand onto the white flower. She dropped it quickly into the basket before anyone would notice. Daksha’s back began to ache and her finger was hurting. She stood tall to stretch a little and was relieved to see the other girls walking towards the farmhouse for their mid-morning breakfast dosa. She could imagine the little pancake filled with all kinds of delicious treats when her Papa was happy. He used to pick her and Sarla up at the same time and swing them around and around until they giggled so hard Daksha was afraid she would not be able to even stand by herself. She and Sarla would tease their Papa with little bites of their dosa, never quite letting him get a nibble. Mama was happy then too, smiling from her bed while she fed little Ramesh. A dark shadow passed through Daksha’s mind as she stood with her empty dosa in her hand. No filling and no Papa. 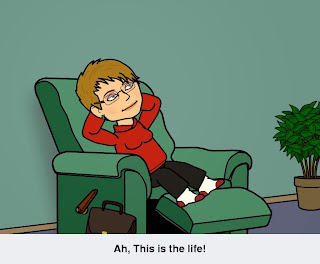 As a blogger, there are times when I write and delete and write and delete, thinking I have said it all! Done! Nothing new! I am reminded of an exercise in a writing class a few years ago when the instructor introduced me to free-fall writing - writing whatever came into your mind. Granted this was a fiction class and writing about the crack on the wall was witty and deep at the same time! Blogging is different. It is a glance into my world, my day, my head and that can be a boring place some days. So, I put on some country music with Shania Twain blasting Up in the background, sat down at my keyboard, and decided I would freefall through my life today. You are welcome to join me.

Refugee, eh! Started in Nanowrimo - To Be Finished Soon!

So I hit 50,000 words recently and finished the Nanowrimo challenge. Over three months ago! That is a decent sized novel! I was inspired by the clash of attitudes I encountered during our recent Canadian election regarding the Syrian refugees and further moved by the attack in Paris and my involvement in bringing a Syrian family to Osoyoos. Yeah - me and Lawrence Hill! The subject of my book attempt is centred on refugees of a different kind - Canadian and frightened.

Although the title is still under review, I know now how the love story will end but, I might make it into a sequel too. Especially if there is a market for Novella sequels!  Hence this after midnight post! There is so much to remember, so much to change, so much to feel that I am going to do an unprecedented thing! I am going to share it with you pre-edit. Yikes. Deep breath. So, here it goes!

Angels and Mistletoe now available in An Okanagan Tapestry 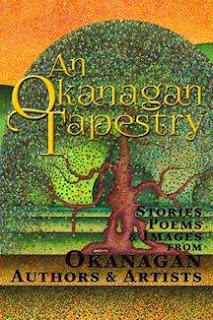 As a newbie to the world of writing, I have never pursued publishing any of my stories.  This opportunity came up in 2015 and my story was accepted.   Celebrating my first baby step as an author!  The story is titled Angels and Mistletoe.


Katherine's blue eyes stared out the window into the early dawn, watching the snowflakes float suspended in the glow from the yellow street light.  She lingered in the warmth of the bed, delaying the morning trip to the bathroom for just a few more minutes.  The floor would be cold and she hated slippers.
"Slippers are for old ladies with walkers and old men in bathrobes," she mumbled to herself.

Voices from the Valleys now available! 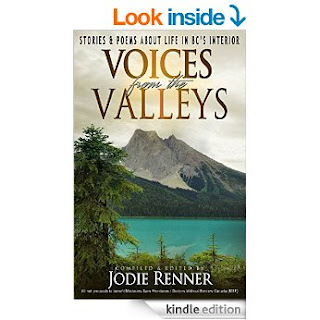 You are never going to find such an amazing mix of stories written by BC writers about BC places anywhere else. If you want to learn more or just re-visit some favorite places, pick up the e-book at Amazon now!

Snowbird Melting is my short story in Voices From the Valleys.  I’ve included an excerpt below if you’d like to try it before you buy it!! AND, for my friends' information (you all seem to ask!), it is purely fiction but based on my initial take on Osoyoos as a community, my involvement with the Art Gallery, and, the many unique, wonderful people that populate this small town. The visual pictures painted with my words can only ripple the surface of the pure loveliness of the place!
VOICES FROM THE VALLEYS – Stories & Poems about Life in BC’s Interior
Amazon.com  Amazon.ca  Amazon.co.uk
This high-quality anthology for charity features entertaining short fiction, fascinating memoirs and articles, and thought-provoking poetry by 51 talented BC writers, fiction or real, from the ’50s to today. Cover to cover, you will visit the Interior of British Columbia, Canada from your armchair and read about challenging experiences in remote areas, encounters with BC’s wildlife; harrowing experiences with forest fires; pulse-pounding adventures; humorous people-watching stories; touching childhood memories; coming-of-age tales; stories about relationships and family bonds; and funny-only-in-hindsight true accounts.
All proceeds from book sales, after production expenses, go to Médecins Sans Frontières / Doctors Without Borders Canada (MSF). In this edition, all photos are in black and white. For the Canadian edition with colour photos, contact CobaltBooks.net or RedTuqueBooks.com.